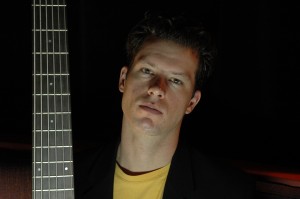 Currently employed in many areas of the music industry, Jeremy Coates is one of Western Canada’s busiest working bass players, with more than fifteen years of performing and teaching experience. Comfortable in the studio, classroom, and concert hall, Jeremy has developed a variety of approaches to jazz improvisation with respect to his instruments, which include acoustic bass, electric 4, 5, 6-string basses, as well as tuba, guitar, and drum set. He has traveled throughout the United States, Canada, Australia, and New Zealand, and has performed at the Montreux jazz festival.

Jeremy has completed the course work for a Doctor of Arts degree in Music Theory and Composition at University of Northern Colorado. With a proven knowledge of both classical and jazz theory and history, Jeremy has a deep understanding of issues facing musicians in today’s ever-expanding music industry. The secondary project in his academic degree, Jazz Pedagogy, supports the many teaching engagements he has held thus far in his career.

After finishing an undergraduate degree in Jazz Performance at the University of Calgary, Jeremy continued to write and perform original music, while maintaining a busy schedule of composing, touring, and performing as a freelance artist in Western Canada. After several years of diverse musical experiences that ranged from holding master classes to recording studio albums, Jeremy was pleased to receive the opportunity to return to university in order to further develop his musical knowledge and abilities.

On receiving a graduate teaching assistantship at Jacksonville State University in Jacksonville, Alabama, the Calgary native continued his post-secondary education in the United States. He familiarized himself with the core elements of classical history and theory, earning awards of excellence for high marks, and attaining a Master’s degree in Music History. Before leaving Alabama, Jeremy recorded with Jacksonville State’s big band and was featured as a soloist on the album Extra Credit.

Jeremy then proceeded to doctoral studies at the University of Northern Colorado in Greeley, Colorado, where he was awarded a second teaching assistantship that required him to direct big bands and jazz combos. While performing on electric and acoustic bass, and as a soloist in Jazz Lab Band I, Jeremy played alongside esteemed trumpeter Nicholas Payton, New York composer Maria Schneider, and veteran jazz musician and composer Bob Brookemeyer.

Jeremy was also entrusted both to perform and direct the top improvisation ensembles at UNC—a position held by numerous educators now teaching jazz at leading institutions across North America. While working with and developing the composition skills of his students, Jeremy produced, recorded and submitted an all-original recording to Downbeat magazine. His group later won Downbeat’s award for top collegiate jazz group (May 2003).

Jeremy now resides in Calgary and is working on various projects towards the completion of his degree, which include a concerto for bass and chamber orchestra, a set of variations for brass quintet, and a suite for double bass and marimba. In addition, as of February 2005, Jeremy has completed a solo album of original jazz and world music, featuring fourteen local musicians.